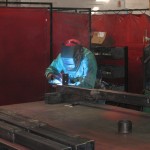 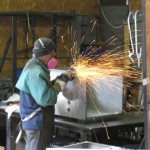 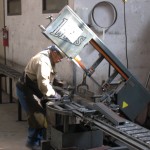 Zomeworks Corporation, currently a leader in the field of Passive Solar Energy products, was incorporated in 1969.  The focus was on the building of Zomes – dome shaped zonohedra living spaces; in New Mexico, Colorado, California and beyond.  We also built Zome playground climbers and even a Gibbon Flight Cage for the Albuquerque zoo. The 31-Zone Structural System, a space frame system for which we were awarded a patent, was developed into a modeling kit, made of specialized plastic ball joints and different sized sticks sold as the Zometoy. In the 1980s this structural system was discovered in nature as Quasicrystals by John Cahn and other scientists at the National Institute of Standards, who purchased Zomeworks modeling kits and the Zome Primer which describes the mathematics of the system.  The manufacture of the Zometoy modeling system was licensed to Zometool, Inc (formerly Biocrystals, Inc.) in Colorado who made improvements and currently manufactures and markets the kit as Zometool®.

During the ‘70s Zomeworks developed a number of products for architectural sun control; Skylid® insulated self-operating louvers, Beadwall™ moveable insulation, Sunbender® reflector shades, as well as passive solar water heaters such as Big Fin™ absorbers and Bread Box batch water heaters. The company also experimented with passive solar heating such as air loop rock storage systems and drum walls. The oil crisis brought many customers looking for ways to reduce their energy bills. Tax credits and subsidy frenzy followed. When the tax credits expired and oil prices came down, the public lost interest in energy conservation. Many installations of these systems are still in use today and Sunbenders are still available from Zomeworks.

The ‘80s brought photovoltaics from use exclusively in satellites in space to applications on Earth and they began to sell immediately.  Zomeworks developed the Track Rack™ passive solar tracker for photovoltaics and began selling them to those who lived off-grid. The tracker (which operates with a shifting weight of refrigerant, as did the Skylids) continues to be the most popular Zomeworks product.  Many thousands of trackers are operating around the world – turning to the sun each morning and following it throughout the day increasing the yield of photovoltaic panels for such jobs as water pumping.

In the early ‘90s, as the solar business expanded, Zomeworks developed the Cool Cell® temperature regulating enclosure, to protect and extend the life of batteries used with photovoltaic systems. The solar community wasn’t ready, but the Telecommunications industry, just beginning to move out of centralized hubs in insulated buildings to remote sites where batteries were used to provide power, enthusiastically welcomed the Cool Cell solution to stand-by battery storage. For several years Cool Cell sales made up 70% of Zomeworks sales.  Business ebbed dramatically when the dot com bubble burst and following the demise of Enron.  Recently Cool Cell sales have picked up considerably as some of the Utilities and Telecommunications companies have come to appreciate their reliability compared to electronically controlled cabinets.

Also in the ‘90s President Steve Baer began working on a new way to heat and cool buildings without outside power.  Years of experimentation with waste IV plastic bottles, and other containers of water for thermal mass began at Zomeworks.  The Andy Shack, in the Zomeworks yard, has received many makeovers over the years as a structure on which to hang one system after another.  Most worked, but each new one was an improvement.  Finally in 2007, the company began the construction of the two Double Play Dave Houses with Swiss made absorbers on the south facing walls for winter heating and the Snap Cap™ metal collector roof for summer cooling.